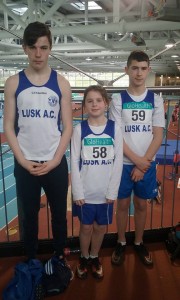 March s​aw​ Lusk AC take on the National ​I​ndoor Championships in Athlone​,​ Co​ ​Westmeath​.​ ​E​ven though it was the biggest field ever to qualify for the events all the athletes looked as if ​they had attend many times ​- despite it being the first for most.​ It kicked o​f​f with Kate McKenna in the U13 girls shot putt and followed on from there with DJ Reily in the U14 Boys high jump and Leah Reily in the U12 Girls high Jump​. ​Oìsìn McEvoy was next up in the U15 Boys shot putt, after that the first athlete on the track was Grace McKenna in the U-14 girls 1000m walk​.​ Then Sarah Derham took part in the U18 girls long jump,; ​with a short break until the pole pault. ​Competing in the U15 Girls​ were​ Grace Codd and Èabha McNally ​while​ Sarah Derham ​competed in​​n the U18 Girls ​and took home a silver medal. 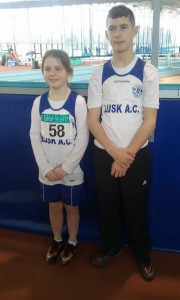 Being part of a National weekend is something very special and all the Lusk AC athletes were definitely that and can all be very proud of their achievements in getting to the National Championships. It was wonderful to see the Lusk AC vest out on so many events. In total there were 12 athletes who took part in 16 events and every age group from U-12 to U-19 was covered over seven events. The club certainly appreciated all the support from the stands when everyone took to their events.​

We are a very proud club of all our athletes to have competed and to have taken home one gold, two silver, one bronze and had six more make it into finals.