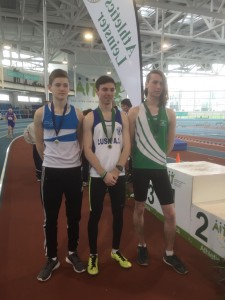 Four Lusk AC athletes travelled to Athlone to take part in the Leinster championships this weekend.
In the Junior women’s pole vault competition Maeve Flynn took gold with a jump of 2.60m matching the championship record.
In the junior men’s pole vault competition Bernard Hollands was just pipped for third place on count back.
Brian Flynn took gold with a jump of 4.20m – shattering the previous championship record (previous record was 3.60m) and setting a new PB.
In the junior men’s 3km Darren Ryan took gold with a time of 9:06 mins where he lead from the front for the entire race. This was Darren’s first run on an indoor track.